LA alt-rock group The Neighborhood's 2014 hit "Sweater Weather" recently made its way to the top of TikTok trend charts, but it's their new music video for 2020 single "Stargazing" we should all be talking about.


The video, starring frontman Jesse Rutherford, is a companion piece to The Neighbourhood's recent video and single "Pretty Boy" in which we're re-introduced to the character Chip Chrome, an aspiring artist who wants to make it big, but is having a tough time breaking through. Devon Lee Carlson returns as Chrome's love interest, and follows his journey to stardom through the California desert. 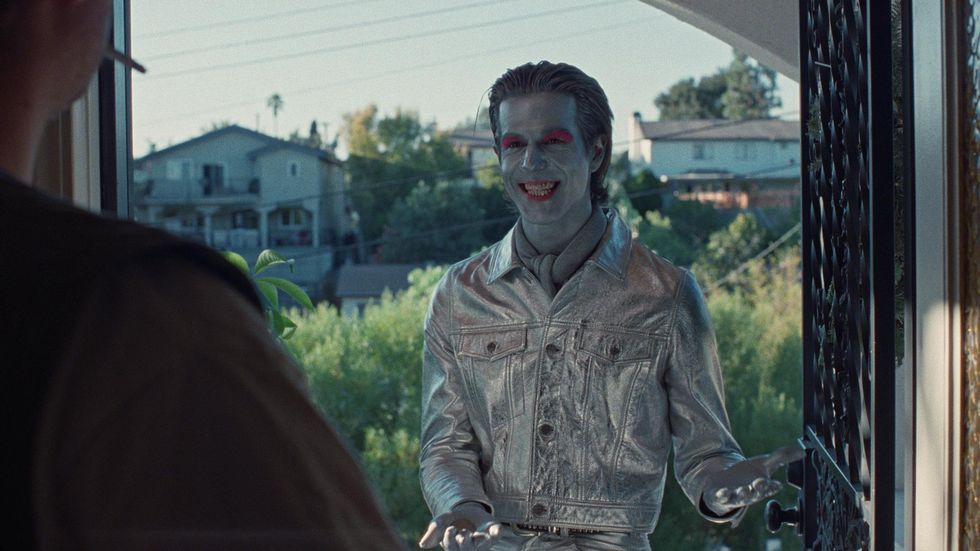 Chip's journey leads him through Beverly Hills where he knocks on the homes of some famous faces, like Jaden Smith, Mac Demarco, Lana Del Rey and Alexa Demie, to name a few, looking for an opportunity to make it big, only to be turned away.


Ramez Silyan, the director behind both "Pretty Boy" and "Stargazing," sat down with PAPER to talk to us about Chip Chrome's adventures, California and what's next for him.


Tell me a little bit about some of the work you've done in the past.


Workwise, I kind of started as early as possible. There's like that age old story of, you know, you don't want to make movies because they impacted you as a kid. And you thought it was just this apex of storytelling, and I just gravitated towards, you know, I want to do this, I think I was 13-14 years old and I had a weekend where I'd gone to a friend's house. I'd slept over at a friend's house for the first time. And like, his dad had this insane movie collection and we were just pulling DVDs off the shelf, and we watched Clockwork Orange, American History X and Stand By Me, I think we watched all three movies in a single night and didn't sleep. Long story short, I want to do whatever that did to me since then. And I just looked for every opportunity to make visuals.


I was also in a band at the time so I decided to just start making music videos for nothing. And that just got me started thinking like, "oh, this is what I know these people need, they need content and I'm learning so let me just try this." It led me down a path where I was just emailing and asking people: "I love your stuff. I'd love to make something for you for free. Like, just let me shoot you," And that ultimately led me to working with one artist ... One day, his manager called me and was like, "You know, you did this video for me in the past, and I have this new artist we really need a video next week." And I was like, "Okay, what do you want? I'd love to help." It ended up being Lil Peep. 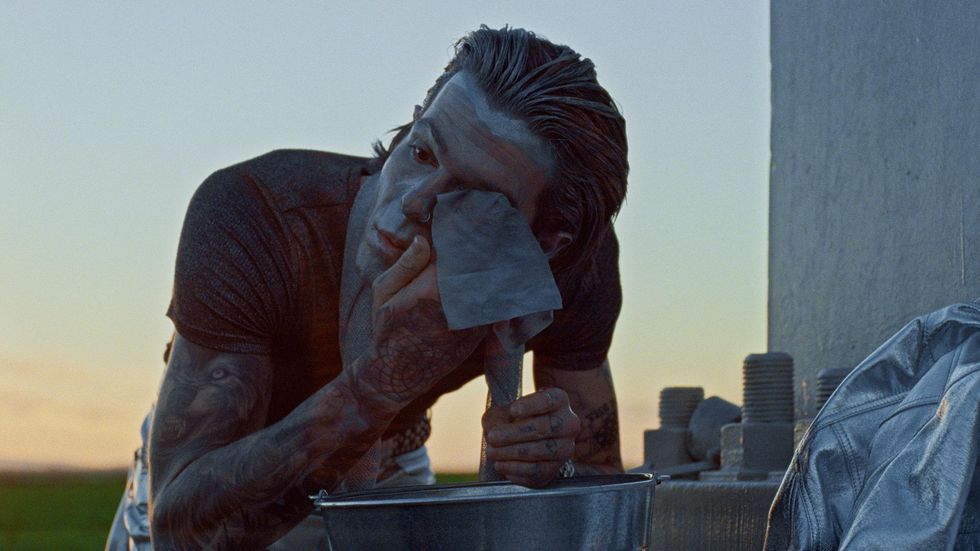 What can you tell us about the inspiration behind "Stargazing" and its connection to "Pretty Boy?" What was the concept behind the video?


As I was working on the [Lil] Peep videos, I moved into this apartment on the Miracle Mile area of LA, and it's just me and my girlfriend in a one bedroom, and we start seeing this other couple in the building. We were like, "Oh, they look cool," you know, it was that weird period of walking their dog, saying hi, walking past each other and after a couple weeks we just started like hanging out and we'd like crash at each other's apartments and order pizza. Purely just, this is the coolest neighbor ever. I mean, obviously I was aware of his band [The Neighbourhood] — and just because they had such a huge smash hit six or seven years ago. Even though our worlds collided in such an easy way, we didn't rush into working together.


Once I saw that Chip persona come to fruition — I remember Jessie mentioning like, "I want to just be completely silver" — I was just extremely from the jump, like, I love this, I'm very attracted to this. It's a very chaotic image that I know I can have a lot of fun with. It felt like something jumping off from somebody like [David] Bowie or Prince. It just felt so over the top and glamorous, whereas I feel like when I worked with [Lil] Peep, he definitely put on a persona, but it was the opposite. It was like more of this "I don't care, I'm gonna do whatever I want. I'm gonna roll out of bed with greasy hair and look good." Chip was like, "No, no, I want to be as immaculate and fabulous as possible," and that was just so different. So somebody who's like: "I want to be as shiny and eye-catching as possible and then I'm going to make good music that people aren't expecting from me," ... I was just all in.


In both "Pretty Boy" and "Stargazing," California, and specifically LA, is a huge part of the narrative — almost as if it were a character unto itself. Was this city tribute intentional, was it part of the vision going into filming? 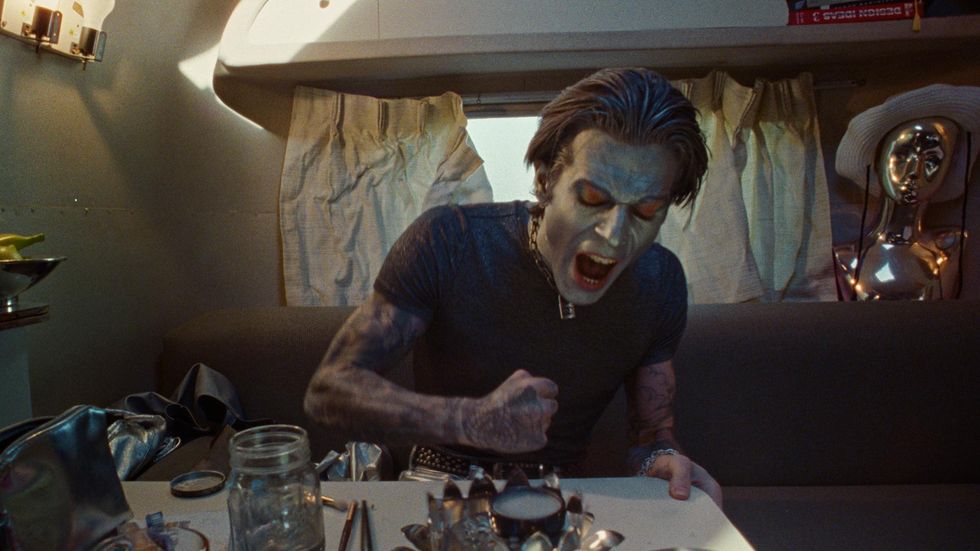 Yeah, absolutely. I'm a native to LA — born and raised — and something that's interesting is that it's the most filmed city in the world, but it's all fake. Everybody comes here to like, "We want to go to Hollywood" and then go to Hollywood, and there's, like, a guy half naked passing down the street and strange needles in the gutter and skid marks in the middle of the road. It's just disgusting. I don't say that in a way to talk down on it, it's more of like, there's this imagination that Hollywood is beautiful and there are stars covered in gold on the floor, and this is where dreams are made. But in reality, it's where people go to get extremely drunk and wander the street, so there's no uniformity. There's clashing neon signs, there's no building codes and it gives it this crazy neon, sunburst vibe. And then there's the regulars that just crawl the street and everything about it is just so. I mean, there's nothing like it, that's for sure, but I feel like, there's this idea that people come here and expect it to be amazing and they expect Disneyland.


So The Neighbourhood is like this band that's been so synonymous with Los Angeles. Their biggest song basically feels like you're at the beach, their iconography is all palm trees and they've sort of built their entire image around how beautiful California is. I wanted to just tap in and flick all of that. I want to show that like sort of gritty Hollywood, like the sort of the nastiness of it, but shoot it in a way that I feel like it normally isn't.


In the video for "Stargazing," I see that you had frontman Jesse Rutherford take on the persona of Chip, along with star-studded cameo appearances by Jaden Smith, Lana Del Rey, Mac Demarco, Blake Griffin, Benny Blanco, and recently, Alexa Demie. You also had Devon Lee-Carlson play the main character's love interest. How did their characters reflect the storyline?


There's the immediate connection to stargazing, this idea that the stories in both videos ["Pretty Boy" and "Stargazing"] are meant to reflect. There's a realism to it that I fantasized within the story. The cameos are obviously meant to represent the stars and Chip himself wanting to be a star — wanting to be part of that — and this sort extra realization that he's a star in his own right. It's sort of this meta thing because these are all his friends and all the people in the video are people that he knows but also, this sort of idea that they're playing characters still. Some of them sort of disapprove of him or open up from completely unfazed in the beginning to full acceptance at the end. It's not supposed to be representative of their character, but more of the journey of life and self discovery. You're gonna face so much failure, you're gonna face so many people slamming the door in your face, but all it really takes is somebody to leave the door open for you to come in. 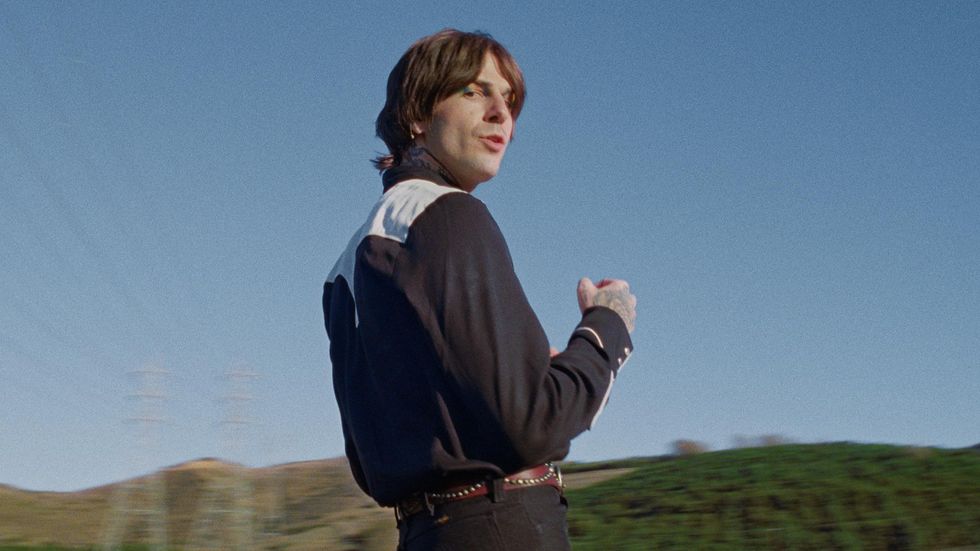 What's next for you after this? Are you going to create more music videos in the coming year?


Oh, I want to do anything but lay low in 2021. I think the biggest hope is that we cross the threshold on the pandemic and people can feel safe and healthy. This year was supposed to be the year that I made essentially my first feature film. And I hope that that comes to fruition now next year. I can't say too much about it now, but, I will say I have started developing the whole Chip Chrome story into a feature adaptation. I just love it and I just think that there's a wealth of incredible story to be told there. These videos give me such joy that I have to keep pulling that thread and see where it goes.


Watch the "Stargazing" video, below:

Photos courtesy of the NBHD